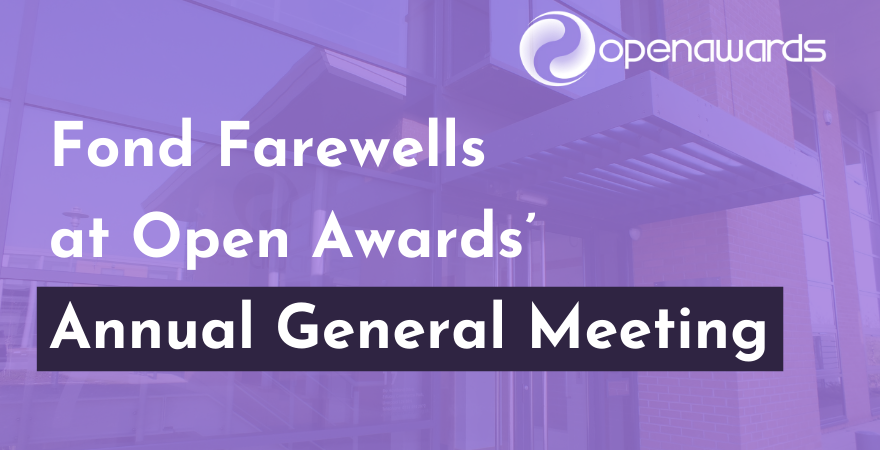 June moves us close to the end of another exciting year for Open Awards and to the start of an academic year that is likely to prove challenging.

Thursday 23rd June saw the Open Awards’ Annual General meeting for 2021/2022 academic year. And what a year it is proving to be.

The Chief Executive Report for the year pulled out some key highlights:

As well as an opportunity to celebrate the last 12 months, and look ahead for the next year, this AGM was particularly poignant as it saw the retirement of two of our long-standing advocates, supporters and Trustees.

A first special thank you went to Julie Wilson who has been on our Board of Trustees for 12 years. In addition Julie has played a key role on our Access to HE Committee, bringing her knowledge of and passion for Higher Education.

Secondly, and taking early retirement from Open Awards as he travels the world is our outgoing Chair, Phil Hunter. Having been on the Board of Trustees for 8 years, Phil has led the Board constructively and supported the Senior Leadership Team and wider staff team at Open Awards. We thank Phil for all he has done for us, and the legacy he is leaving.

As well as sad goodbye’s, this meeting also saw the arrival of two new Trustees: Ben Jordan from UCAS, and Dr Harm Van Zalinge from The University of Liverpool. We welcome them both to Open Awards, and judging by the first Board meeting, we know they are both going to have a positive impact on the organisation.

Finally, Trustees voted in their new Chair to lead Open Awards through the next three years. A huge congratulations to Nicky Mailey who is taking on the role of Chair of Trustees after six years as a Trustee with Open Awards.

“I've loved working with Phil as a Trustee over the last 6 years and feel very honoured to have been nominated to take on the role of Chairman following his departure.

His pragmatic approach and good humour has helped steer Open Awards through some challenging times and we have achieved incredible growth over the last few years. I hope to continue where Phil has left off in taking us from strength to strength. We have some exciting plans in the pipeline which I'm looking forward to sharing with our stakeholders as soon as possible.”

Now there is just the small matter of summer awarding as the whole team at Open Awards ensure that all learners receive their certificates and transcripts for their qualifications, units, and End-point assessments, and then, just like that, another academic year will be over! Thank you to Trustees, colleagues, providers, learners and all other stakeholders who are making this year such a success. 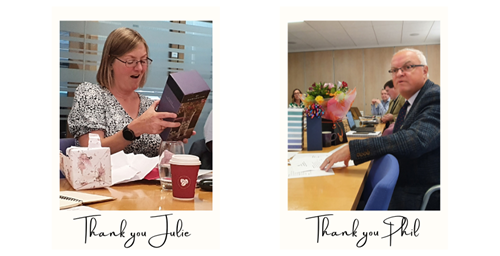