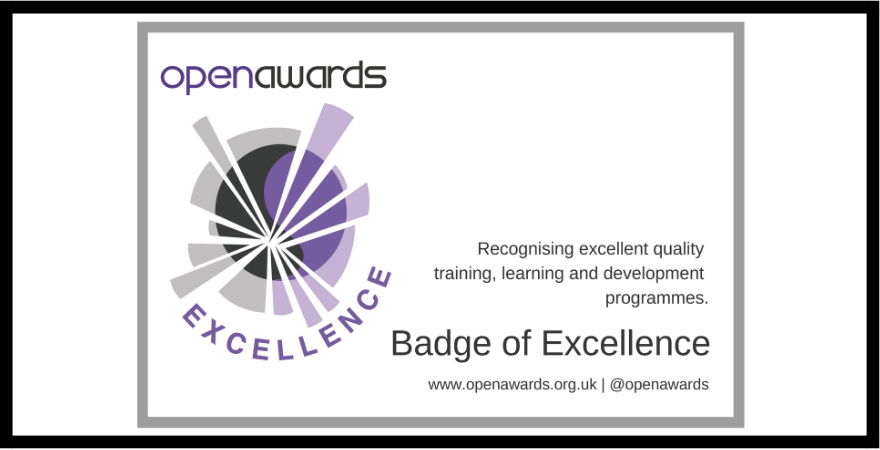 The impact of an Open Awards Badge of Excellence Programme.

New Futures is a small Private Training Provider based in Kent.

The Centre has chosen to utilise the Open Awards Badge of Excellence Certification option for it’s “Being Assertive” programme.

Being Assertive is a short; 18hr programme delivered over 6 weeks and one that does not lend itself easily to a regulated qualification.

The Open Awards Badge of Excellence does, however, provide Learners with a confirmation that the programme is Quality Assured by an Awarding Organisation.

“Thank you so much for the Badge of Excellence feedback. I have to be honest and say that I was amazed by the very positive feedback you gave us.  It is so nice for us, and for our work, to be recognised in such an impressive way”.

"It was a great pleasure to work with Simon on the New Futures Being Assertive programme application and to review the extensive, comprehensive and high quality planning the Centre presented as evidence."

Although this is a short programme, its impact is significant in changing the lives. This corresponds with the Open Awards Vision of “Changing Lives Through Learning”.

The following comments relate to their most recent programme.

After separating from her abusive partner Q was in a women’s refuge. She had two young children with her as well as two young adult children who had left home. She had low confidence and self-esteem and said that her life was chaotic. She found it impossible to refuse others and as a result was ‘always getting into trouble [with other people] and then feeling guilty’. She said she needed to learn how to say no to people to stop herself getting into inappropriate situations and relationships. Q embraced with enthusiasm all the Being Assertive course had to offer and what she could learn from it. Her Index of Change in Assertiveness showed a significant improvement over the six weeks of the course. During Being Assertive she related two incidents where she made dramatic changes in her relationships. She told a friend who had borrowed money from her that she needed to pay it back straight away and rather than meeting her inappropriately in a bar (she had two young children with her) she insisted on meeting at a coffee shop. She was able to assert herself and negotiate repayment of the money. In the second incident she told her oldest daughter that as an adult she now needed to take responsibility for her behaviour and not rely on her mother to bail her out any more. At the end of the Being Assertive course Q made a comprehensive list of strategies and skills she had learned on the course and which she would be using to change her life. Crucially, she said she had now ‘found herself’ and had improved her confidence and self-esteem ‘enormously’. She said now knew better how to deal with people and protect herself from being exploited in the future. With her new found confidence she is now engaged in volunteering work and had been able to assertively negotiate housing for her and her children with local authorities.

P had been through some very traumatic life experiences and had suffered a breakdown in her mental health and had been hospitalised as a result. She had lost her job and was unemployed. She was trying to put her life back together and was volunteering at a local community centre. She heard about the Being Assertive course from other people who had been on a previous Being Assertive course. She said she need to re-build her confidence and self-esteem to help her interact more with other people. She also wanted to get back into work. She found it very difficult to be assertive and say what she wanted and needed. Although quiet and self-contained P had a good depth of understanding of herself and other people and made many thoughtful contributions to the group. P absorbed everything Being Assertive had to offer and by the end of the course was interacting with the rest of the group. She was quite serious at the beginning of the course but notably by the end was smiling and chatting with the other people. She demonstrated a significant improvement in being assertive by the end of the course (Index of Change Towards Assertiveness). During the course P applied for several jobs and successfully gained employment after the course had finished. Crucially she felt able to challenge her new employer and negotiate working hours to fit with her needs. Given her circumstances she was able to show courage and determination in turning her life around.

Y had separated from her family and moved into a women’s refuge to escape an abusive relationships with her husband. When she learned about the Being Assertive course she was in the process of going through a difficult and painful divorce and had just moved from the refuge into a flat on her own. She was estranged from her children who had remained with their father. She was in the process of starting to put her life back together and need to rebuild her confidence and self-esteem. Once she was attending the course it was clear that although she had great determination to build a new life Y had considerable anxiety about the unknown future ahead of her. Y engaged with enthusiasm with the course and all it had to offer. In the later sessions she made many insightful contributions which were helpful for the rest of the group. By the end of the course Y reported that she had been able to restore a relationship with her eldest daughter who had been to her flat to stay with her over a few weekends. She was now actively participating in many volunteer and social groups. She said that for the first time she felt able to stand-up to her husband and assert her rights and she related several incidents where she had done this. She said that she had ‘really changed’ as a result of Being Assertive and that the course ‘meant so much’ to her. She said that her friends commented on how much she had changed for the better and that she was ‘nearly back to the old you’. She said that she was ‘so glad’ she had done the course, that Being Assertive was ‘absolutely phenomenal !’, and that it had really helped her.

If you would like any further information about the Open Awards Badge of Excellence option, please contact us on 0151 494 2072, follow the link https://openawards.org.uk/what-we-offer/badge-of-excellence/ or speak with your Business Development Consultant